I recently decided to make a hanging garment bag.  My husband and I travel to Indiana frequently and like to leave some of our clothes on hangers instead of putting them in the suitcase.  The clothes get less wrinkles that way.  I had seen Cindy Taylor Oates’ pattern booklet, Trendy Totes & Carryalls.  The booklet includes a pattern for a hanging garment bag as well as one for a laundry bag, crossbody bag, weekender bag, smaller bag, and cosmetic bag.  I decided to purchase the booklet and make the garment bag.  The first thing I noticed was a pink insertion slip with 2 corrections to the weekender bag.  Those corrections did not affect me because I planned to make the garment bag.

When I read the instructions for cutting the garment bag, I was sure there was an error in this pattern, too.  On page 17 the instructions read to cut two rectangles 21” x 36 ½” for the upper bag.  It then said to cut one of the pieces in half lengthwise.  It was followed by instructions to add a 2” x 36 ½” strip to both pieces and then insert a zipper between the strips.  This would become the front of the bag.  It was obvious to me that if two rectangles were cut the same size, one for the front and one for the back, and then one of those pieces were split up the center and two (2) 2” strips and a zipper were added to the width of those pieces, the front and back of the garment bag would no longer be the same width!  My gut instinct told me this would cause a problem when inserting a gusset between the front and back piece.  However, I rarely listen to my gut when working with a pattern.  I assume the pattern is correct and you know what “assume” does for us.  It makes a “donkey” out of you and me.  Even though I knew the instructions were incorrect, I continued to follow them.

The instructions for cutting the second fabric called for two (2) rectangles 7 1/2” x 21” for the lower bag.  Those instructions did not take into consideration the extra width added to the front by the two (2) 2” wide strips and the zipper, so of course, the lower back portion of the bag and strip above it would not attach properly to the top of the front and back piece.  This was mistake number 2.

The next instruction was for making the loop for the bottom of the bag.  The loop would be attached to the bottom of the back piece so it could be pulled up to and over the hanger.  The problem with this instruction was the gusset had already been sewn to the back piece.  Now I had to rip the gusset from the lower back piece to insert the loop and then resew it.  This made me wonder if anyone tested this pattern before it was printed and offered for sale to the public.

The next instruction was to attach the gusset to the front of the bag.  Although I knew this task would be impossible because of the added width of the front piece, I pinned the front to the gusset anyway and, of course, it did not fit!  I ripped the gusset from the back piece and added a strip down the middle of the back to make it the same width as the front piece.  I also had to add a strip the same width to both the lower part of the bag and the strip that is attached above the lower part of the bag.  Then I cut and added an extra length to the gusset.  It was fortunate for me that I had enough extra fabric to make those additions to the back piece, the lower back piece, the strip above the lower back, and the gusset.

Pictures of my finished hanging garment bag are shown below. 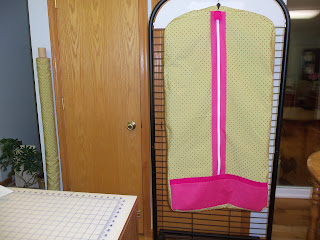 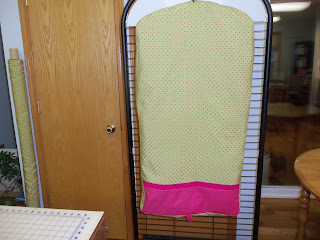 What did I learn from making this hanging garment bag?  Trust your gut!  Don’t just assume all patterns have been tested!  This pattern booklet, Trendy Totes & Carryalls, has six patterns in it.  The booklet had an insert advising of two errors in the weekender bag and I found three errors in the hanging garment bag.  It makes me wonder if there are errors in the other four bags.  Who knows?  I may just be crazy enough to test them myself.  I did advise Cindy Taylor Oates of the mistakes by emails when I discovered each of them.  She responded to my email about the mistake in the width of the front piece causing a problem with attaching the gusset.  She said she would “check it out”.  She did not respond to my second email about the instruction for adding the loop after the gusset was already attached to the back piece.  Maybe that means she has no plans to reprint this booklet and doesn’t care about the errors.  She has an impressive array of patterns out and I would hope she would care enough about her customers to want to make sure the patterns are correct.  She also has a booklet, Duffle Bags with patterns for three sizes of duffle bags and two styles.  These look interesting, so I may sew some of them.


Please continue to sew and try new patterns.  Just trust your gut and watch for errors!

Posted by Chicken Little Sews at 6:29 PM No comments:

Have you experienced a “sewing blip”?  In case you are not familiar with that term, I will explain.  A sewing blip is different from a sewing disaster.  A sewing disaster is a project that you started and it just did not work.  No matter how much you tried, the project did not come together successfully.  So, it ended up in the trash!  A sewing blip is a project that was headed towards becoming a sewing disaster, but you managed to rescue it just before it was thrown in the trash.  It might not be exactly what you originally planned it to be, but it is a finished, useful project.

If you have never experienced either, then you probably don’t sew much.   Most avid sewers have experienced both.  I recently dealt with two projects that caused me some stress.  One is finished and the other is waiting to be ripped apart so it can go from a potential disaster to possibly a blip.

The first blip was a project that started as an effort on my part to get a friend interested in sewing clothes for herself.  She prefers to make quilts instead of clothes.  She knits and does needlepoint.   However, she has no interest in making clothes for herself.  I thought if I could offer my assistance with fitting a pattern and helping her sew an item, she would love making clothes as much as I do.  I learned a lesson from this experience.  Each of us is different.  We can have different areas of interests and still be friends.

My friend decided (with my constant urging) to sew a sweatshirt for herself.  She wanted to use fabric from her stash.  She had a piece of navy fleece and another piece of a grey, navy and red fleece print which was designed to have lines which needed to be matched in a garment.    We chose Vogue pattern V9244 and started the fitting process for the hooded sweatshirt.   While we were pin-fitting the pattern, I learned she did not like the style of the sweatshirt.  It flared out at the hipline and was longer at the sides and back.  With encouragement and help from another friend, we altered the pattern to take out the flare at the hips and shortened the hemline at the sides.  The pattern also had lined pockets that were part of the side front piece.  The front closed using buttons and buttonholes.  She wasn’t sure she wanted to make buttonholes.

The garment was cut and the front and side-front pieces were pinned together.  We noticed the print stripes did not match at the correct points between the two pieces.  We did not have enough of the grey print fabric to recut the pieces and there wasn’t enough navy blue to replace the pieces either.  Are you beginning to see a sewing disaster develop here?   I was able to get more of the navy fleece, so I knew this project could be saved.  However, my friend now had even less interest in the project than she did at the beginning.  I knew who was to blame.  Me!  There were two main reasons this project failed.   The first is I pushed her into sewing something she did not really want to sew.  The second was I overwhelmed her with that pattern.  I should have waited until we could find a simple sweatshirt with a zipper.

Although my friend said she was done with the sweatshirt, I refused to throw it away.  Instead I placed it in a closet for several months.  Recently, I found the project and decided to try to make a wearable sweatshirt for my friend.  I replaced the side-front pieces with solid navy pieces.   No matching of lines was necessary.  I also made front pockets from the navy fleece.  When I pinned the side-front to the back, I noticed the back was too long to  attach to the side-front.  I am sure that happened when we altered the pattern to get rid of the flare at the side.  So, I cut off enough at the side of the back and gradually sloped the hem to be able to sew the back to the side-front.  A picture of the finished shirt and the pattern envelope are shown below. 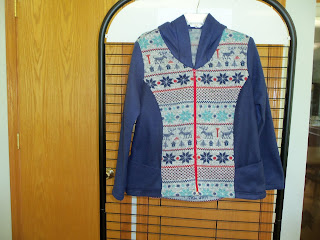 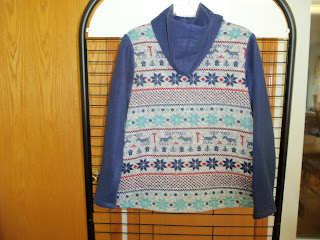 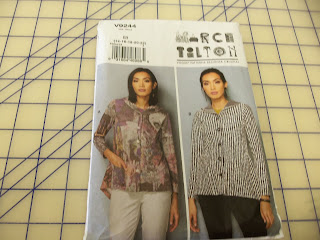 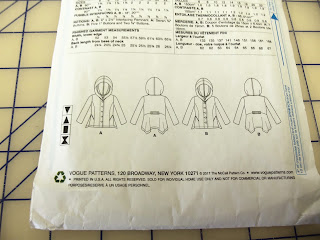 This could have been a sewing disaster, but instead it turned into a sewing blip.  It did not turn out as planned but at least my friend got a sweatshirt out of the ordeal and hopefully, I retained her friendship!

I hope your sewing experiences are going well with no blips or disasters!


Posted by Chicken Little Sews at 9:20 AM No comments: