My Boo-boo Coat
I finally finished the coat I started at the August Lansing Clippers’ Sewing Retreat.  I had to force myself to keep at it until it was done!  As I said in my September 4th post, the coat was a disaster because it did not fit.  I knew if I wanted to rescue it, I would need to do a lot of alterations.  I loved the fabric and I invested a fair amount of money when I purchased it.  So, I worked on the alterations the last two months doing a little at a time.

Then I trimmed fabric off the sleeve seams because the sleeves were too large.  I had to increase the seam allowance of the side seams of the coat fronts and back under the arm.  The next step was to sew the sleeves back into the coat.  I held my breath.  Would the sleeves fit in the armscye after all the alterations?  Yes, they did fit!

The lining was next on my list of alterations.  I had not sewn the lining, so at least I would not be ripping out seams.   I assumed I would be making the exact same changes to the lining pieces as I made to the coat, so I kept a detailed list of all the alterations as I made them on the coat.  I had not sewn the lining together yet, so I was able to lay each piece on the corresponding piece of the coat.  Much to my surprise, the pieces matched!  There were no alterations needed on the lining.  Then a light bulb suddenly went turned on in my head.  Now I understood what was wrong with the coat.  I think I cut the wrong size coat for me and then cut the correct size lining.  No wonder the coat was too large for me even though I have used this pattern for 20 years.   I have most of the sizes traced on pattern paper because I have helped others of varying sizes make this coat and I have samples sewn for others to use to determine their size.  Now I am ready to throw away all sizes of the pattern except mine, so I will not repeat this mistake just in case I decide to use this pattern again!

Not only was it difficult to manipulate the fabric with the lining attached, but it was difficult making the buttonholes using the heavy coat fabric to make them.  I should have used a lighter fabric in a solid green color for the patch to make the lips of the buttonholes, but of course I did not do that.  Everything went okay until I did the opening of the third buttonhole on the facing side.  I managed to sew the square of interfacing on the inside of the facing instead of the outside.  I failed to notice that until I cut the slit into the facing which caused another boo-boo!  I did some ripping and then some very careful sewing around the slit.  I finally completed all four buttonholes.  These buttonholes are far from perfect, but at least the coat is wearable. 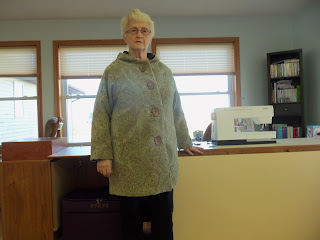 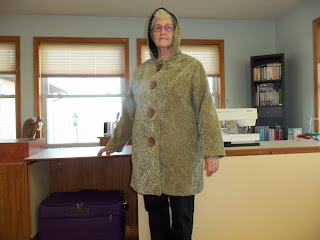 Posted by Chicken Little Sews at 9:09 AM 2 comments:

I have been quiet on my blog lately for one simple reason.  Probably like most of you, I have been extremely busy!  One of my projects was making items to contribute to a church bazaar in Indiana.  My daughter, Marcia Rush, passed away last year from cancer.  She loved helping with her church’s bazaar, so I decided to contribute items last year and again this year in her memory.  This year I made crib sheets, baby bibs, and twisted infinity scarves for the bazaar.   With the help of Marcia’s family in Indiana, those items were set up with an “In Memory of Marcia Rush” sign and picture at the bazaar on Saturday, October 28th.

Another of my projects was fitting a shirt pattern.  Sewing would be so much easier if I could just pick a pattern, cut out a garment and have it actually fit me with no alterations needed!  Anyway, I worked on Kwik Sew #3555 shirt pattern for almost a week.  I decided at that point it was as good as I could make it for now.  The next day I went to a three day shirt class taught by Bill Voetberg in Wyoming, Michigan at Lakeshore Sewing.

Bill did a trunk show for the Lansing Chapter American Sewing Guild (ASG) in September.  He showed many of his beautiful shirts.  Several of us were interested in taking a class from him.  Although we had made shirts in the past, we knew Bill was using techniques that would improve the quality of our shirts.  And we were not disappointed!

There were eight students in the class and most of us were at different skill levels ranging from just beyond beginner to expert.  Bill managed to keep control of the class and kept us moving along.  This was a fast moving class which lasted only 15 hours, so not everyone completed the shirt in that amount of time.   I believe those who did not complete the shirt in class will be able to complete it at home using the knowledge gained from Bill’s demonstrations.  I finished my shirt yesterday. 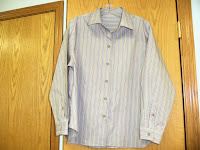 I enjoyed the class and liked Bill’s method of presentation.  No matter what problems we had with our shirts, Bill’s response was always, “Don’t worry.  We will handle it.”  And he did even though we were working with several different shirt patterns!  I would definitely take another class from him.
I hope each of you will take every opportunity to either learn a new sewing technique or improve a technique that is already familiar to you.  Have fun!

Judy
Posted by Chicken Little Sews at 12:19 PM No comments: