Years ago, I had my body image scanned into a computer in order to have patterns made for me from that scan.  It actually worked!  The patterns purchased from that company were really a fairly good fit.  Since that time, I have made some minor adjustments to the shirt pattern.  I think maybe it was too difficult and expensive for most people to travel to the company to have the scan.  So, the company did not survive.  I recently decided to use that pattern for a shirt for my summer 12-piece wardrobe.

When I first began to plan this wardrobe, I found a piece of scrappy plaid fabric in my stash.  If you wonder what “scrappy plaid” is I would describe it as a plaid fabric that has been cut into many small pieces and then sewn back together in no particular order.  This fabric has been in my stash for many years and I wondered if I would ever think of anything to make with it.  There are lots of colors including pinks and blues in the fabric, so I thought it would look okay with the navy, wine, and tan pants in my wardrobe.  I decided to try a shirt.  The worst that could happen would be the shirt would end up in the trash and the best would be I might actually like the finished product.

The computer-generated pattern I used for the shirt had a collar band and a collar.  I decided it would be easier to work with the scrappy plaid fabric if those two pieces were combined into one because there were already so many small seams in the fabric.  I traced the two pieces together and then made some changes to accommodate the overlapping seams.

After cutting the pieces of the shirt, it was fairly simply to sew together.  I finished the seams by serging them.  I used the 4-thread overlock stitch on my Babylock Ovation serger.  I just read somewhere that is better to use a 3-thread overlock stitch when finishing seams because the seam will be less bulky and you use less thread.  I hope I can remember to try the 3-thread overlock on my next blouse to see if I like that better.  It is hard to break old habits, especially when sewing.  Techniques are always changing and frequently new ideas can make a real difference in the appearance of a garment and also in the amount of time required to complete the garment.

Below is a picture of my finished scrappy plaid blouse. 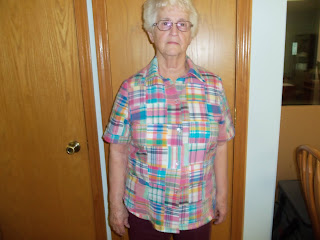 I hope your sewing projects are going well.  Are you giving some time to teach those who would like to learn from you?  A great place to start is right in the family!  Make sure you pass on your love of sewing and your sewing skills to your children and grandchildren.

I know it is difficult at times because children sometimes don't realize they may have a need and even a desire to sew later in life.   I think my oldest daughter now wishes we had taken the time when she lived at home for her to learn more about sewing.  Now that she lives near Atlanta, Georgia and I still live in Michigan, it is difficult to get together to sew.

I wish I had made more of an effort to find the time and patience to teach both my daughters to sew.  It is difficult to find that time when we are trying to raise children and work, but I know there are women who are able to do that.  On the other hand, it is never too late to teach someone to sew.  Just use whatever time you have and make it happen!

Posted by Chicken Little Sews at 12:19 PM No comments: